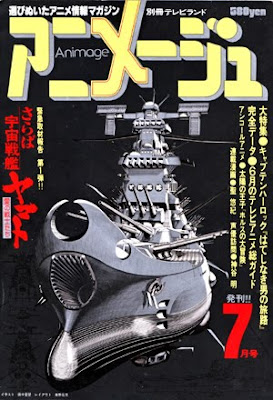 
The Anime Grand Prix is an annual award that the japanese animation magazine Animage do every year. Began awarding the best of the Japanese Animation of 1979 on it's January 1980 issue and so it has been successively in each year, awarding the anime generally on the June edition of the next year. The criterion for the evaluation of each anime are counted considering its popularity, quality and influence.

The only mandatory criteria for the inclusion of the animation series/movie/OVA or ONA at the Anime Grand Prix is ​​that its production (complete or mostly) must be made in Japan.

Animage (アニメージュ) is a Japanese magazine of anime, manga and entertainment launched by the publisher Tokuma Shoten. Began it's publication in July 1978 and has a monthly periodicity, it is considered the first exclusive magazine of japanese animation in Japan.

It is together with Newtype and Animedia considered the leading publication about anime from Japan.

The magazine was created in response to the huge growth of popularity that anime was getting at the time. In 1977, Hideo Ogata (Tokuma Shoten editor) launched a project to create a publication focused 100% on the animation universe, shortly after a special edition of TV Land (magazine television program) focused entirely on the anime series Space Battleship Yamato broke the track record of sales of the season, with 4 million issues sold. This was the decisive point for Tokuma Shoten to create a magazine focused exclusively on animation, with Hideo Ogata occupying the chair of the editor-in-chief at the time.

The first edition came out on July 5, 1978 having sold out all editions, with a total of 7 million issues sold.

The famous manga artist Osamu Tezuka, considered the father of modern manga and anime, contributed to the founding of the magazine together with the editors of Tokuma Shoten and continued to contribute to the publication through columns that he published on its pages about the industry until the end of the '70s, after his departure he was replaced by other industry professionals like Osamu Kobayashi (director and voice actor, directed anime like Kimagure Orange Road and Beck: Mongolian Chop Squad ) and Toshio Suzuki (former president of the Studio Ghibli and producer of films like Spirited Away and Howl's Moving Castle).

Today the chair of chief editor of the magazine is occupied by Toshiya Matsushita.

After disagreements between Animage and Newtype editors, in 2011 the Newtype magazine has no longer any influence on the editorial decisions of the Anime Grand Prix award. And in August, 2011 the editorial group of Newtype announced that it has established their own yearly anime award contest and anime film award, the Newtype Anime Awards.

Any anime release between October and July of the said year is eligible. And visitors to Newtype's site can vote for the different categories. The awards are presented during ceremonies that are held on different japanese cities and on the October issue of the japanese edition of Newtype.

Click here to check the winners of the Newtype Animation Awards on it's many categories.

In 1983, it was created the Japanese Animation Awards (also known as Atom Awards) which linked the five largest publishers of anime magazines of the time (Animedia, Animage, Animekku, Monthly OUT and Anime Anime), designers, actors, voice actors and famous cartoonists (including Osamu Tezuka and Katsuhiro Otomo) in an anime industry award.

In 1989 the award was canceled on its 7th edition due to a series of problems, among them the death of Osamu Tezuka and the Emperor Showa and the crisis that affected the Japanese publishing market at the time.

However the Anime Grand Prix continued at the Animage journal without interruption.

Click here to check the winners of the Japanese Animation Awards on its many categories during the years of 1983 to 1989.

The award is made ​​in form of lists and has the support of the readers of the Animage magazine and other's magazines such as Newtype and Animedia (the third largest magazine aimed at anime currently in Japan) who vote through forms that are launched on the issues every month, these votes are tabulated and attached to the votes of the editors and other invited professionals (editors, animators, voice actors and etc..) and an average result is obtained.

Letters and emails that the fans send to the Tokuma's Shoten office over the year are also taken in consideration.

In the end the final results are released in the form of lists ranging from 1st to 100th place.
Aside the ranking made in the June issue of the magazine there is also the annual ranking by popularity, which is done one month after the outcome of the Anime Grand Prix. The counting of votes used for this ranking is made ​​in May (with the announcement on Animage itself) and it is counted only the letters and emails that fans send to the Tokuma's Shoten office during this period or through votes in the Animage's Website.

On that case, there is no participation of the editors in the choosing drawn.

Click here to check the winners of best anime on their respective years of the Anime Grand Prix version cited above.

It is considered one of the most important awards of the animation industry in Japan, and also the oldest of it's kind.

Below are listed all the winners in their respective years, to look at the full list including favorite characters and songs just click on the year or the name of the anime: